As a young South African filmmaker, Thando Dyantyi’s strongest desire has been to tell the life-changing stories of people in his community and around his country. These stories are for everyone to see, but most especially for the people whose stories he shares.

However, not everyone in his community can afford to go to a cinema. Many do not even have a television. So, Thando and two of his friends, Sinesipo Sibuta and Odwa Nomavuka, came up with another way to share these stories, to uplift the voices of their community, so that every one of them can be heard: by launching Kayamandi’s very first radio station. 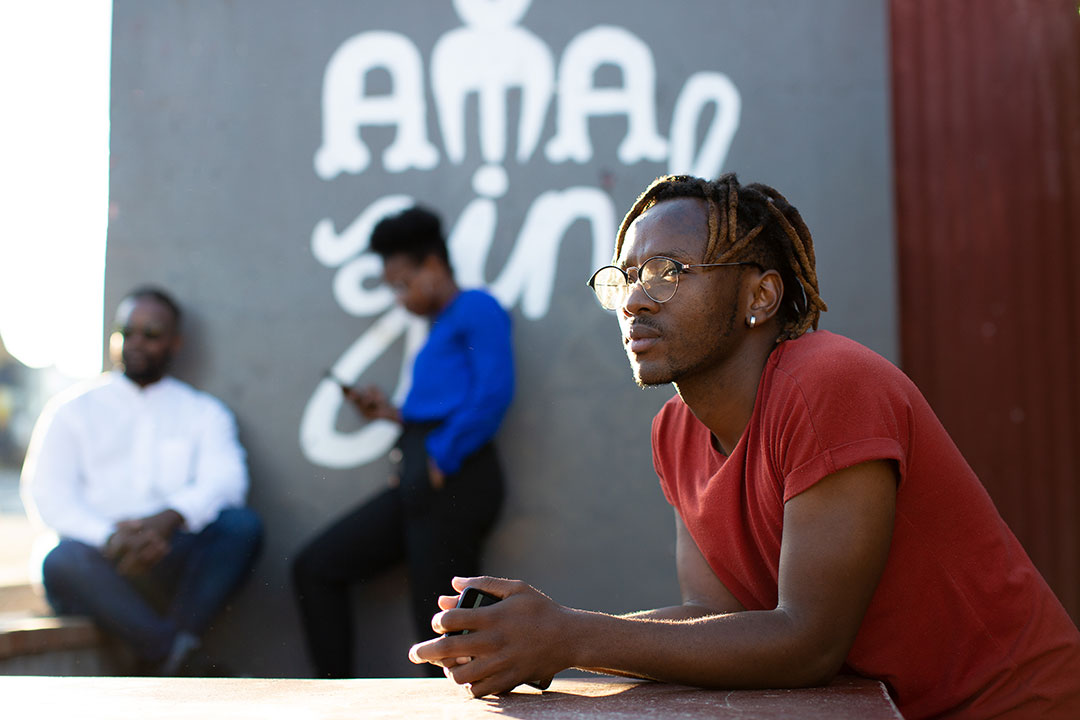 Where did it all begin?
“The idea has been there for quite some time,” says Thando. His mother was a strong influence: “She always listened to the radio” and when there was no radio, Thando loved nothing better than listening to his mother’s stories.

However, Thando adds, “I never thought (radio) was going to be something I did as a career”. As a child, he wanted to be a performer in the entertainment industry. “When I was on stage, that’s where I felt like I found myself… I didn’t want to be just behind the scenes; I wanted to be our voice through entertainment.”

Whilst still in his first year of film studies, Thando interned for a local radio station. In no time at all, he found himself hosting his own show and wondered if he should even drop his film studies to pursue the career in radio. Fortunately for the film world, he chose to finish what he had started and, since graduating, Thando has won many awards, including best director in South Africa in 2016.

Fast-forward to 2020 and lockdown, the arts and entertainment industries have been particularly hard hit and movie-makers face insurmountable hurdles to exercise their craft and recover from the effects of lockdown. And yet people depend on them so much – not only for entertainment, but also for a sense of connection and comfort. In isolation, Thando realised that “we can’t reach out to people and many people are feeling that their voice is going to fade. And also the community – most especially, my community – they feel like their voice is not being heard”. 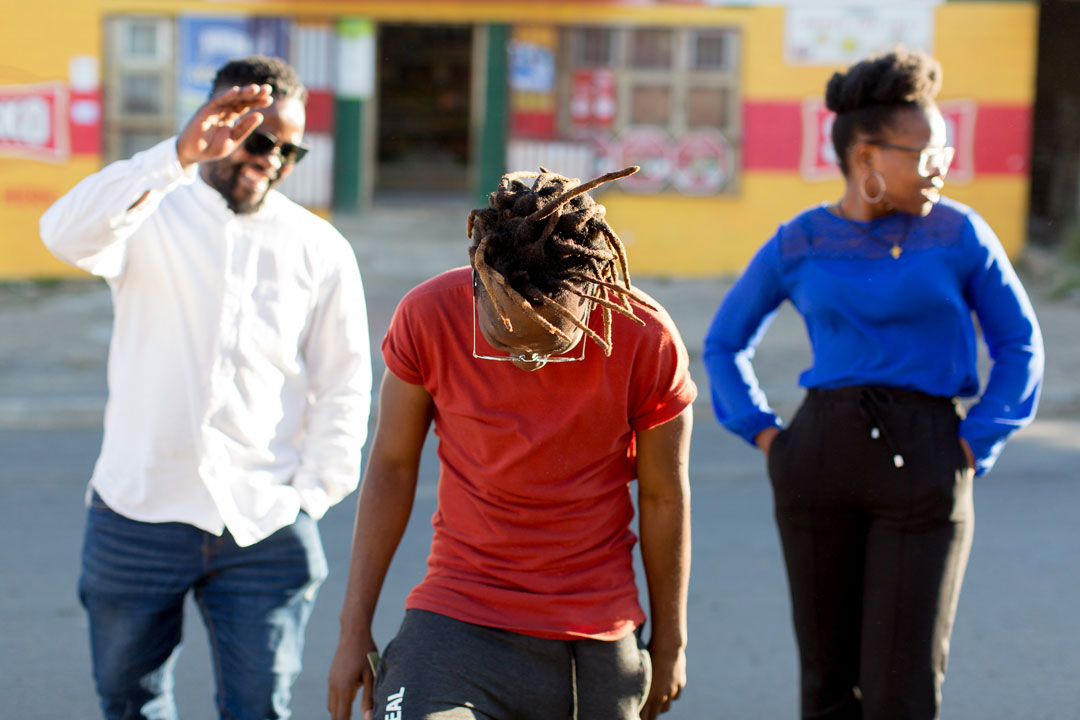 Reaching out through radio
So, he asked himself, “How can we create a platform where we can reach out and connect? How do we do it for our community? How do we show it is going to empower and educate our community and its surrounds?”

And, with these simple questions, the ‘stage was set’ for the re-birth of Thando’s dreams of working in radio. His dream included a ‘voice’ to which, “when you are listening, you feel you are at home. Whether it is something small or big. It will be heard”. He wanted also to create a safe and comfortable space.” And so “Ikayalabantu” – meaning “Home of the People” – was born.

This “Home of the People” needed a physical home too, so Thando approached long-time friend from film school, Odwa Nomavuka, for assistance. Odwa owns Amazink – a local venue in Kayamandi that has space both for a restaurant as well as performing arts. Odwa immediately bought into the idea and vision: “Having a radio station will be great for Kayamandi,” Odwa says. “News will be shared. Everyone can hear music and keep up to date with the news. In turn, this will make the place safer”. Odwa also understood how the radio station itself needed to be in a space that is accessible to both those who live in Kayamandi as well as those coming to visit: “Ikayalabantu FM fits here perfectly”.

With the space secured, Thando still needs funding to set up the radio station. The Nedbank Proud of my Town programme has covered initial office expenses, but capital expenditure required to set up a proper radio station will come to more or less R400,000, which is a rather big dream to dream. But Thando is a positive thinker and holds out for like-minded community players to join forces with him… 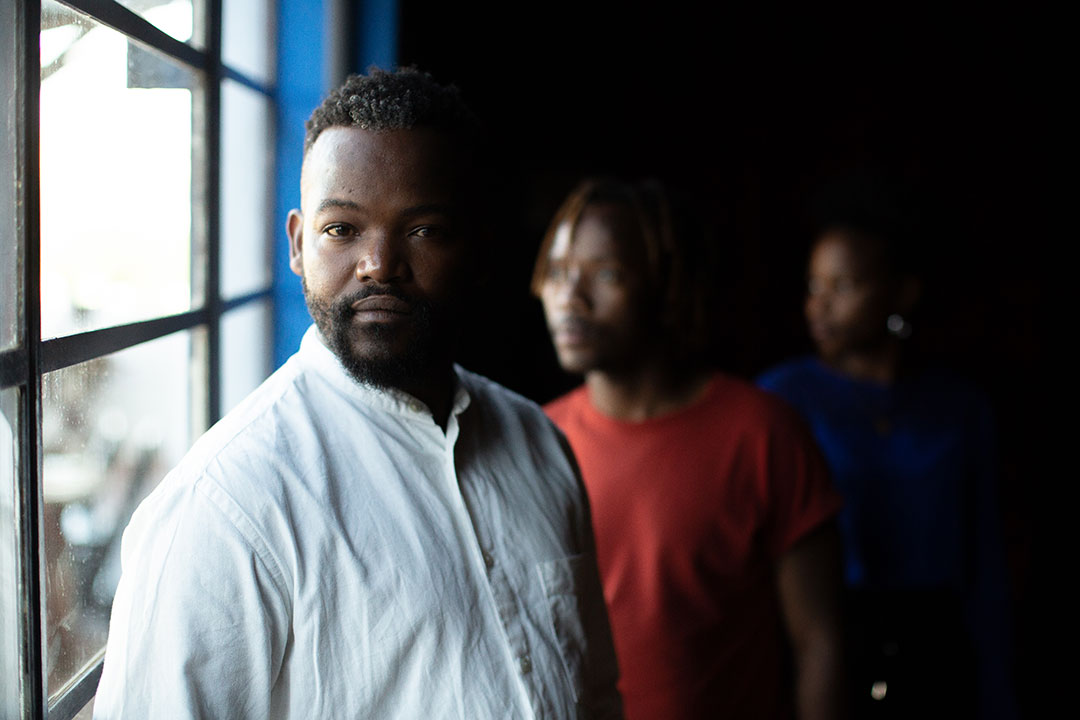 This brings us to the third member of Thando’s dream team: his good friend, Sinesipo Sibuta, currently a marketing campaign manager at Shoprite. Originally from the Eastern Cape, Sinesipo also grew up in Kayamandi and the two met when they were both part of the same youth programme. With an undergraduate degree in International Studies and a post-graduate degree in marketing, Sinesipho’s qualifications and her heart for the community make her the ideal partner to launch the radio station. In Thando’s words, she is a real “community activist. A change agent. She is very grounded when it comes to community work. In fact, for her, it is always about community”.

According to Sinesipo, the main purpose of the radio station is “to uplift voices of our community so everyone can be heard”. It is also to give people opportunities: “Opportunities to find work, to talk about their small businesses that the community doesn’t know about, or to get support. It will also broadcast opportunities from around the world that are not known to the small community we come from. So it’s an exciting adventure this team is embarking on”. 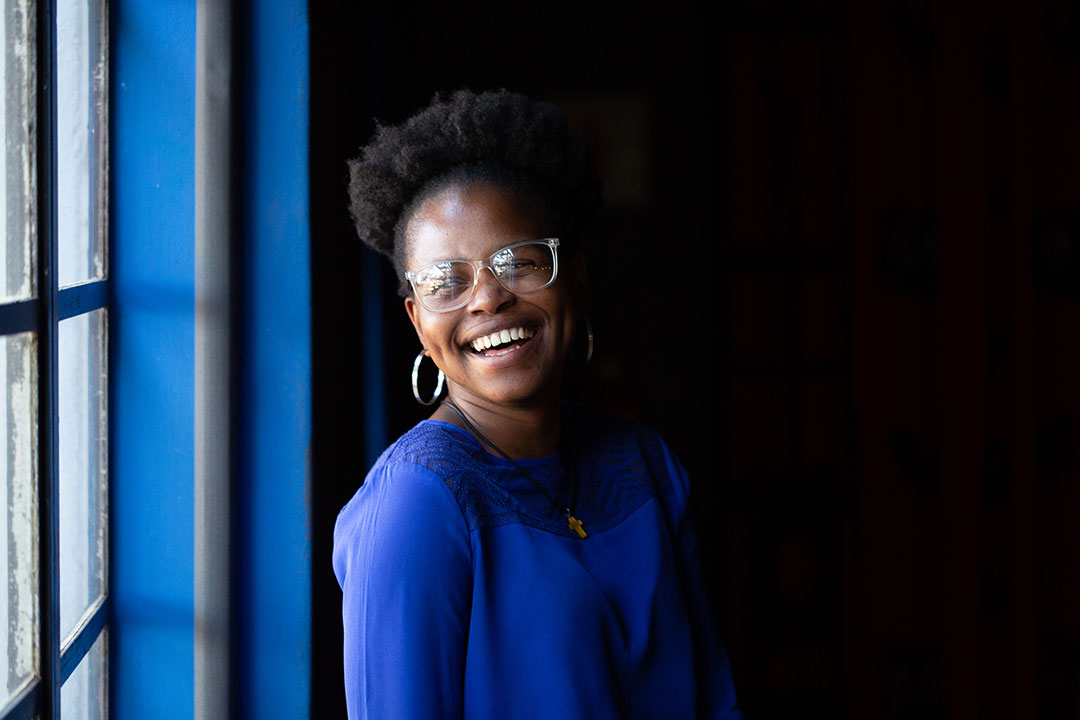 Thando agrees that currently, “too many people are missing out – or worse: losing hope for their future. There are so many graduates in Kayamandi who are looking for jobs but who are not employed. Sitting there with their degrees, sitting at home, doing nothing, feeling like it was a waste of time and that they don’t matter”. Odwa adds, “It is frustrating when local government organises something but that information doesn’t get to Kayamandi. Then people miss out on job opportunities. Miss out on training. We are hoping to connect the government and everyone else. We also want to work closely with both police and the health clinic. To help keep people safe, not just informed”.

In a nutshell, the new radio station offers a much-needed platform for sharing opportunities, bridging gaps and keeping people safe. But Thando has even bigger dreams too: He also wants to bring his community to the outside world, providing a platform for Kayamandi talent to meet a broader audience. 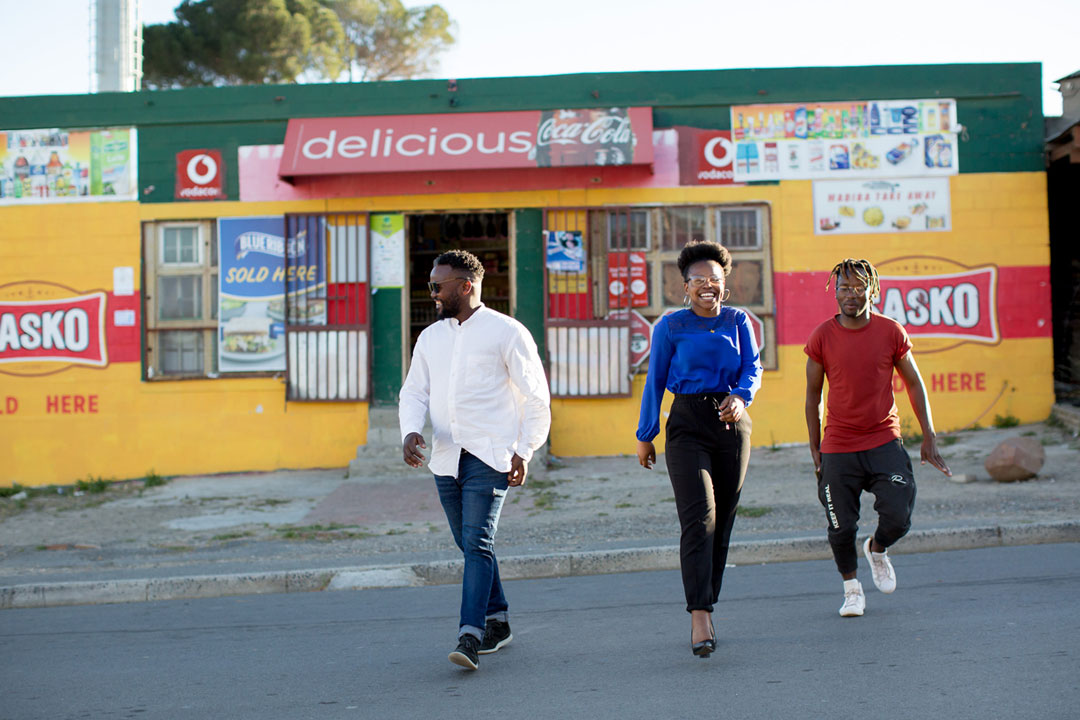 “If you go to Kayamandi, you see so much talent on the streets. Kids rapping on the street corner, recording music, but what do they do with that music? It just ends up in Kayamandi. You find so many soccer stars in Kayamandi and you just feel if this guy can just join a PSL team he will just go. We have so many stories of talent but only a few that make it. So, that’s what I want this radio station to do – to just amplify the voices. All voices of Kayamandi. Make sure their voices will be heard one day and for them to know that their voice matters. Like the voice that tells them “One day I am gonna make it. Be the person I want to be”. I want to give them that hope.” 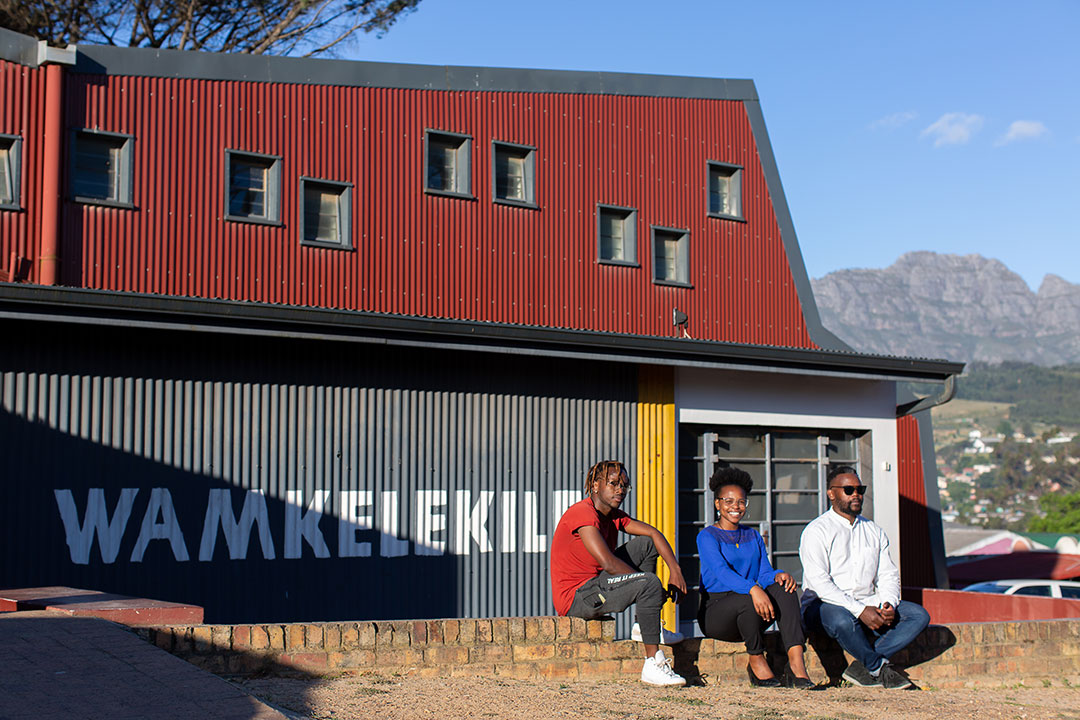 Ikaya Labantu FM will be broadcasting online from Amazink in Kayamandi, until Dyantyi’s proposal to obtain a frequency is approved by the Independent Communications Authority of South Africa (ICASA)